We had an interesting past Saturday.  When checking on the roof for some technology updates that needed to be done, we realized the coolant bottle for the generator was cracked with a large hole in it.  Where to begin on the repair we ask ourselves?  A few emails to our dear German friends with UNICAT (who by the way are awesome) and a couple phone calls yielded the part number and suggestions on how to replace.  BEAR is a unique vehicle with unique systems.  Systems that were mostly built and maintained in Europe.  His generator is a Fischer Panda which you find on a lot of boats around the world.  The setup for the generator and its’ cooling system was custom built.  The generator is under the rig and the cooling system is on top of the cab of the truck.  The generator is in a pressurized box for deep water crossing (BEAR is rated for up to 3 meters/4 feet deep water). 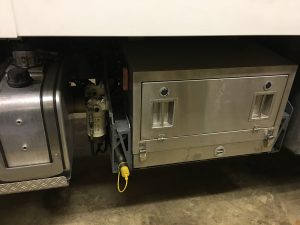 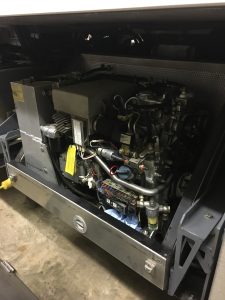 Over the years, we have been very very mindful of our expenses for our rigs.  We have made it a practice of doing the repairs we can ourselves and only paying for what we cannot figure out or don’t have the tools/skills to fix.  So, we set out to change this bottle.  I know you are thinking – change a bottle just unhook the old one and put the new one on — not so quickly.

First, you must climb up on the rig (12 feet in the air), find somewhere to sit (not comfortably) and somewhere else to put your long legs.  Then you must take off the very heavy stainless steel cover without dropping it on the internal working parts of the cooling system.  Per our German friends at UNICAT, we “might” be able to remove about 16 screws and the cover come off OR when we removed those screws and lift the cover off the entire system may drop down and getting it realigned and pulled back up for replacement might be a challenge.  Needless to say, out stomachs were churning as we removed the screws, however, to our excited spirits nothing dropped down as we pulled the top off. 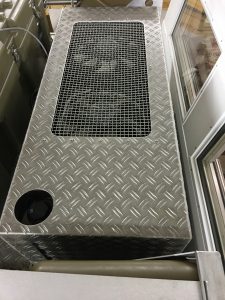 Next step should have been to simply pull the old bottle off and put the new one on.  For those of you who do repairs, you know that is not how it went. When we ordered the bottle, it looked the same as the old one and the vendor said they were the same. Ah, close but not the same.  It came with an entirely different bracket for mounting to the stainless mounting holder on the rig.  So, up went the drill and new holes were drilled. With Kirby on top of rig and me on a ladder 12 feet in the air, we realized that the neck on the new bottle was bigger than the old bottle and had ridges.  We had already made one trip to the store prior to starting this process to buy new tubing for a small connect point and new hose clamps to secure the tubing.  As we worked with the bottle for over an hour to try to persuade it to please go into the tube, we finally gave up and whittled a little ridge off the very end and got a small dab of vaseline to put on the plastic to help insert it into the tubing.  Success! Short lived when we realized that we had purchased exactly 4 new hose clamps for the new connections not realizing that an older hose clamp on another connection was not working due to age — so off to the store as we were one short.  (We bought 2 packages this time and we will the carry extra hose and clamps in the rig.) 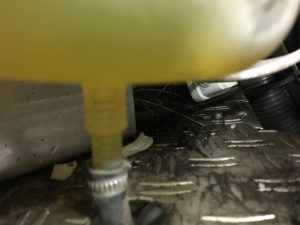 Well, the next challenge was fitting the replacement bottle which, of course, was  just a bit wider than the old one in the very strong stainless steel holder which had 4 holes for the 4 protruding points to secure the bottle.  Challenge yes — success finally, yes — Kirby opened the framework as best he could and I pushed (no beat) on that bottle until it suddenly just popped into place. Yeah!

Next, was to replace that very heavy cover on the entire radiator system on the roof.  Kirby was able to get it back on very carefully — sigh of relief.  However, putting the bolts back in was a challenge as with me even standing on the top of the ladder and clinging to the ladder on the truck, I could not reach underneath to hold the nuts still so he could put the bolts back in place. So, emergency call to our son who is much taller than his momma with longer arms.  He came quickly and bolts began getting replaced.

Top securely on again with no slippage of the unit, it was time to add antifreeze and see it if would go through the hose down into the system.  You see, there was a chance, that a piece of plastic could have gotten into that hose and into the screen in the hose which would clog the system.

Moment of truth… start the generator and see if it pulls liquid out of the bottle.  Ugh, the generator won’t run consistently.  You see earlier in the week we had hired a professional (remember, I said we know our limits) to do the first preventive maintenance (oil and multiple filters change) on the generator.  They ran the generator after the maintenance; however, apparently not long enough.  The fuel line still had some air in it and the engine would die when it lost fuel.  So, it took about 30 minutes to bleed the lines and get the generator running. (Our first thoughts were that some of those plastic pieces made it through and it was shutting down.)  However, years of working with engines Kirby and my son knew the issue was not the plastic, it was a function of getting the fuel lines cleared – and they did.

It was a very long and stressful day.  There is no one in our area that would have known how to make this repair.  They could have figured it out just like we did; however, I do not want to contemplate what the final number on the repair bill would have been.  Once again, through perseverance, patience,  a few grumbly moments and some family help, we were able to make a repair.

Sometimes it is not the beautiful places we travel but the tasks of owning a rig that create memories.  Understand, we don’t see these as bad memories — just simply challenges that turn into memories.  It’s all part of the journey. 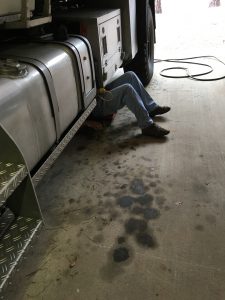