Repairs ~~~ Just part of the Journey!

So….In continuing to check out all of parts of the rig, it was time for the winches. Uh, that did not go as planned, but what has so far. 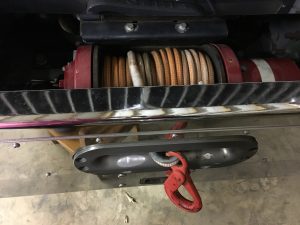 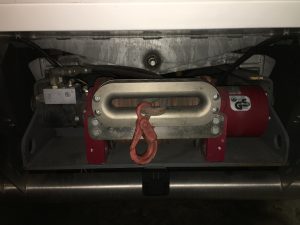 We hooked up the handheld winch controller and turned on the hydraulic switch in the cab of the truck.  Let me back up here a moment, there is a HUGE container through which hydraulic fluid flows (as I was told “it acts as a radiator” in a term I could understand).  The level in this container looked a bit low so we bought 5 gallons of hydraulic fluid to “top it off”.  It took the whole 5 gallons!  We know all about hydraulic pumps and PTO’s from years of working with tractors.  We know how important plenty of fluid is to the system. 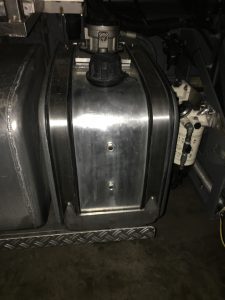 Moving forward, once we switched on the controller in the cab (it’s a bit noisy, but I will take noisy should we ever need to use this system) we pushed the buttons on the handheld switch and out came the cord.  Here’s the ‘but’ – when we reversed it to roll it back in it would not stop.  This winch, that is capable of pulling 15,000 lbs, sucked the cord and the hook back through the front fairlead (hole) and wedged it there with full tension still on it. When it sucked the cord into the spool, it crossed over itself and became entwined in itself.  For those who work with winch lines — you know that’s a bad thing.  Yeah, bad news all around for the front bumper.  The stress level of the humans involved with this test just went up exponentially.  I made the mistake of saying ‘just cut it’ and was met with a resounding “Are you crazy? It would kill us”.  Clearly, I was not completely understanding how this winch works as compared to the winches we have used on four-wheelers many times over the years. 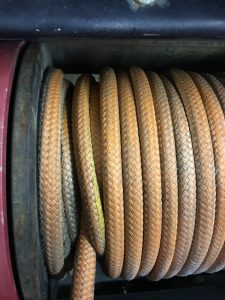 First attempt at resolution (unjamming the hook from the fairlead) involved backing Bear out and going down the road to a very large pine tree.  We placed a very large chain around the tree.  The hook from the chain and the hook from the end of the winch line were combined into one very nice coupling. Bear was backed up removing all of the slack in the chain…. Bear was backed up further to try to pull the hook out of the fairlead … there were two results.  The first result was that the very stout pine tree (24+ inch diameter trunk) was actually moving from the force and bark was flying.  The second result was the very stout, large and stainless steel bumper was actually bowing out around the fairlead.  Conclusion made, we were in a big mess.  To add to the urgency, severe thunderstorms were all around – you could hear the thunder and see the lightning. 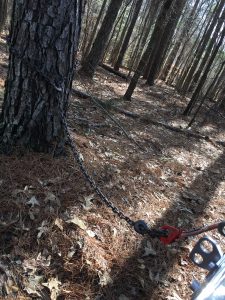 In a true panic, Kirby found via a Google search a hydraulic repair shop only 20 minutes from our house.  However, it was 4:45pm and they leave at 5:00pm.  He called and quickly explained our concern of this hook still under extreme pressure and the effects it could have on our very heavy stainless bumper if left in this condition.  The manager said to come on right away and he would ask someone to stay a few minutes late as there was probably a release valve.

He got there quickly in the middle of a thunder storm (lots of lightning, too) and there was no ‘release valve”.  They began to take off the hydraulic hoses which did not help.  Another person suggested they find a way to release the brake on the winch.  Yes! That worked!

As they would not take a dime for helping us out, I ordered one of those big chocolate chip cookies and had them write “Thank you!” on it and dropped it off at lunchtime the next day.  They could ‘enjoy’ their payment.

Testing continued the next day and went much better.  Both the front and back winches worked well.  Due to our experiences of maintenance on this rig, we will be ordering new winch rope for the front and the back as we found some questionable spots on the ropes. Like I said earlier — should we really ever need this system I want the best.

This system is one that will be added to the “exercise regularly” list that we maintain.  The items on that list get ‘exercised’ once a month.  Lack of use is honestly the biggest issue with any motorized RV in our opinion.  If you don’t use it and its’ systems, you set yourself up for problems.